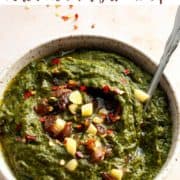 Sarson ka saag or sarson da saag is a wonderful mix of mustard greens and three other leafy greens with a tadka (tempering) of onions and garlic in ghee. Serve with makki ki roti (maize flour flatbread) for an authentic and absolutely delightful vegetarian Punjabi meal. Both instant pot and stovetop recipes included. 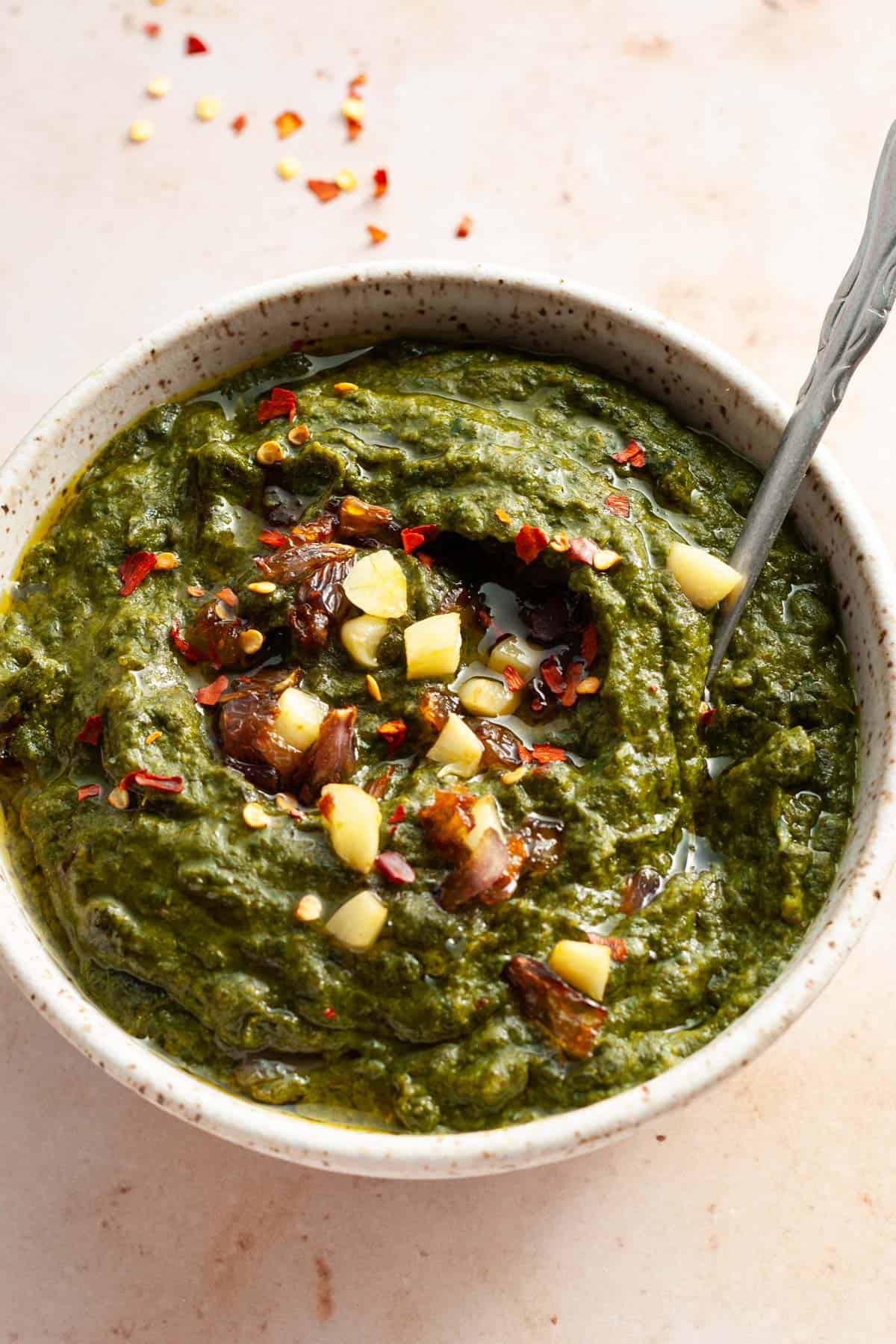 Winter’s almost upon us and I’m making a very traditional, very earthy sarson ka saag along with makki ki roti for dinner today. My boys, who are generally disdainful of vegetables, especially anything green, love this combination and literally devour it so there are no leftovers. That’s how crazy good it is! No kidding.

What is sarson ka saag?

Saag simply means a puree of different leafy greens, and sarson means mustard (here, the greens only). So, this dish is called sarson ka saag. Mustard leaves dominate though other greens like spinach (palak), fenugreek (methi) and lambsquarters (bathua) are also always added to saag.

This dish is a winter staple in India when mustard grows in abundance in the farms of Punjab. If you’ve ever been on the highway through Punjab in India, you will see fields upon fields of bright yellow mustard crops swaying in the breeze. It is quite a treat for the eyes. And a treat for the stomach too, considering that saag with makke ki roti brushed with dollops of butter or ghee is on the menu of every dhaba (roadside eatery) dotting the highway. There’s nothing more delightful than stopping for a hot meal, trust me.

However, since we can’t be there, let’s make the best of it in our home kitchens. Saag is, at its heart, a very simple and rustic preparation. A few basic ingredients go into it so the taste of the greens shines through.

Note: Exact amounts are mentioned in the recipe card further down. Some of these green leafy vegetables may be unfamiliar, but they are usually found in your local Indian grocery stores. Do call to confirm availability before going though.

Here’s a picture of the greens you can use for this recipe. I wasn’t able to take an image of the mustard greens, but rapini is a good substitute and works perfectly in place of mustard. 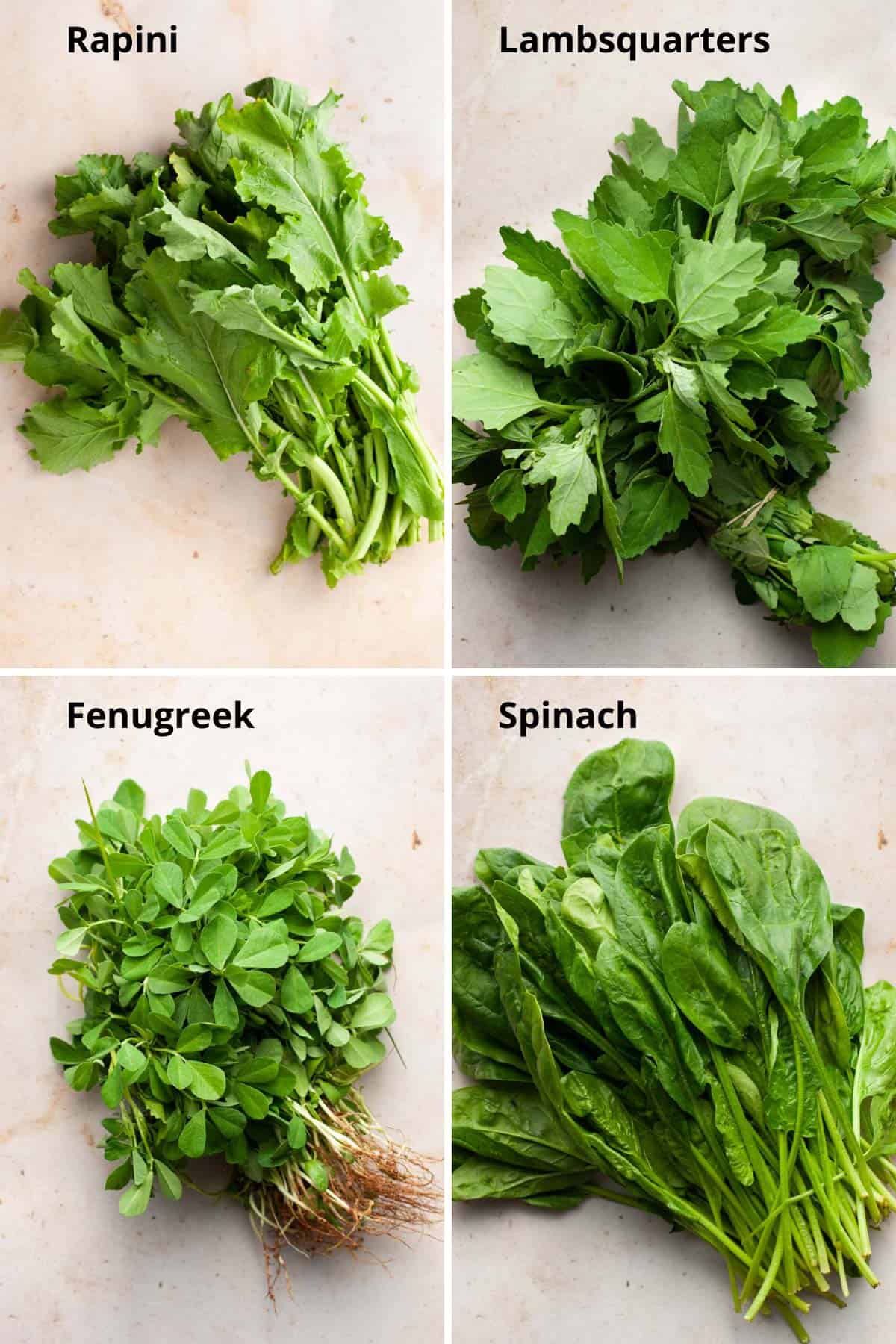 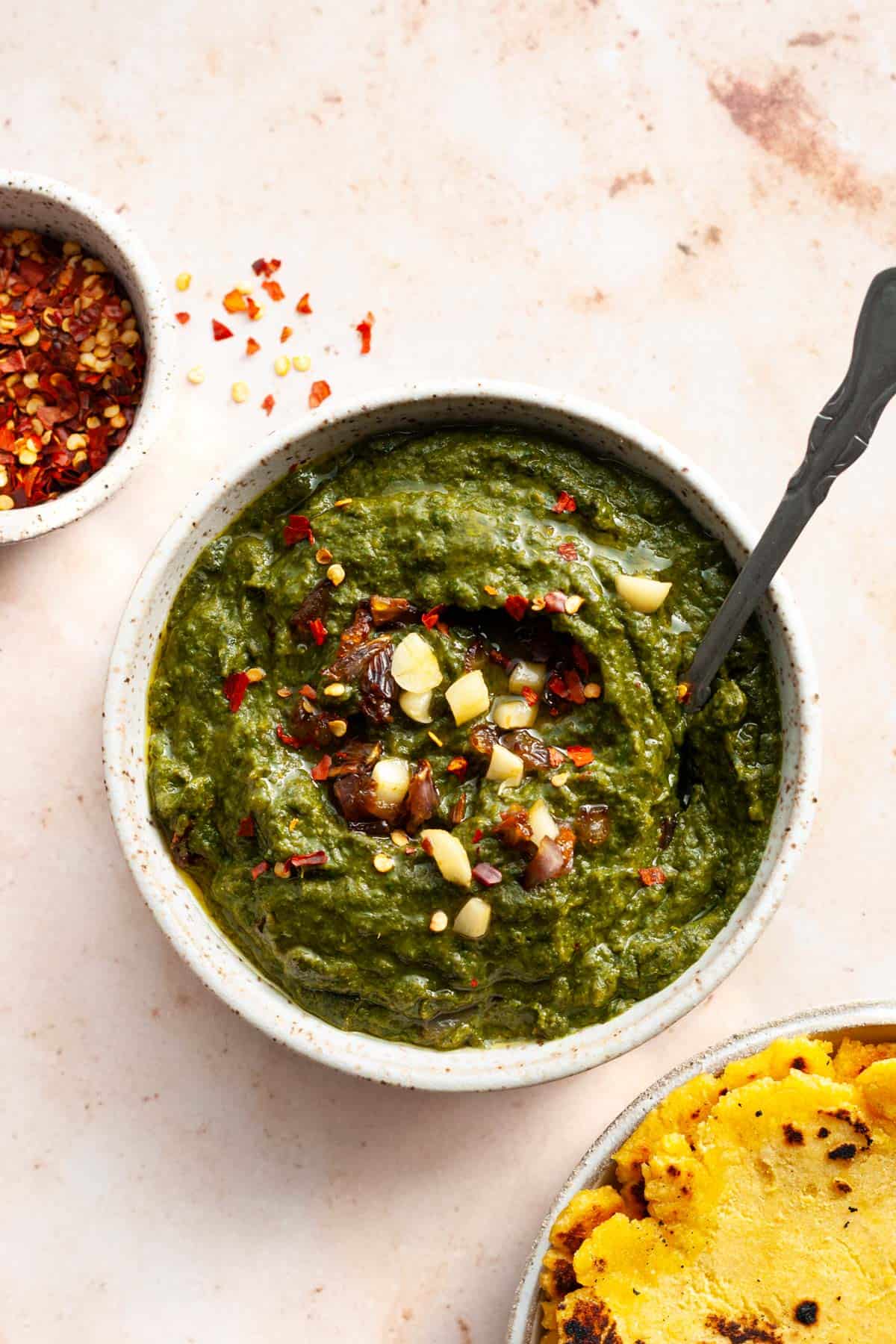 What to serve with saag? Well, of course makki ki roti! Saag is traditionally served with an unleavened flatbread made of maize flour. In fact, sarson ka saag and makki ki roti are like the two complementary halves of an inseparable pair. Like fish and chips…or peanut butter and jelly. Incongruous here, I know, but you get the idea.

Needless to say, saag tastes not just okay or good, but totally awesome, as in too freakin’ wonderful with makki ki roti! Spread some ghee or butter on the bread, break off a piece and scoop up the saag with it. You won’t be able to stop, I promise!

Plus the roti itself is a simple affair. With just two main ingredients – maize flour and wheat flour in the correct proportions – and salt and water, the dough comes together quickly and is not sticky at all. 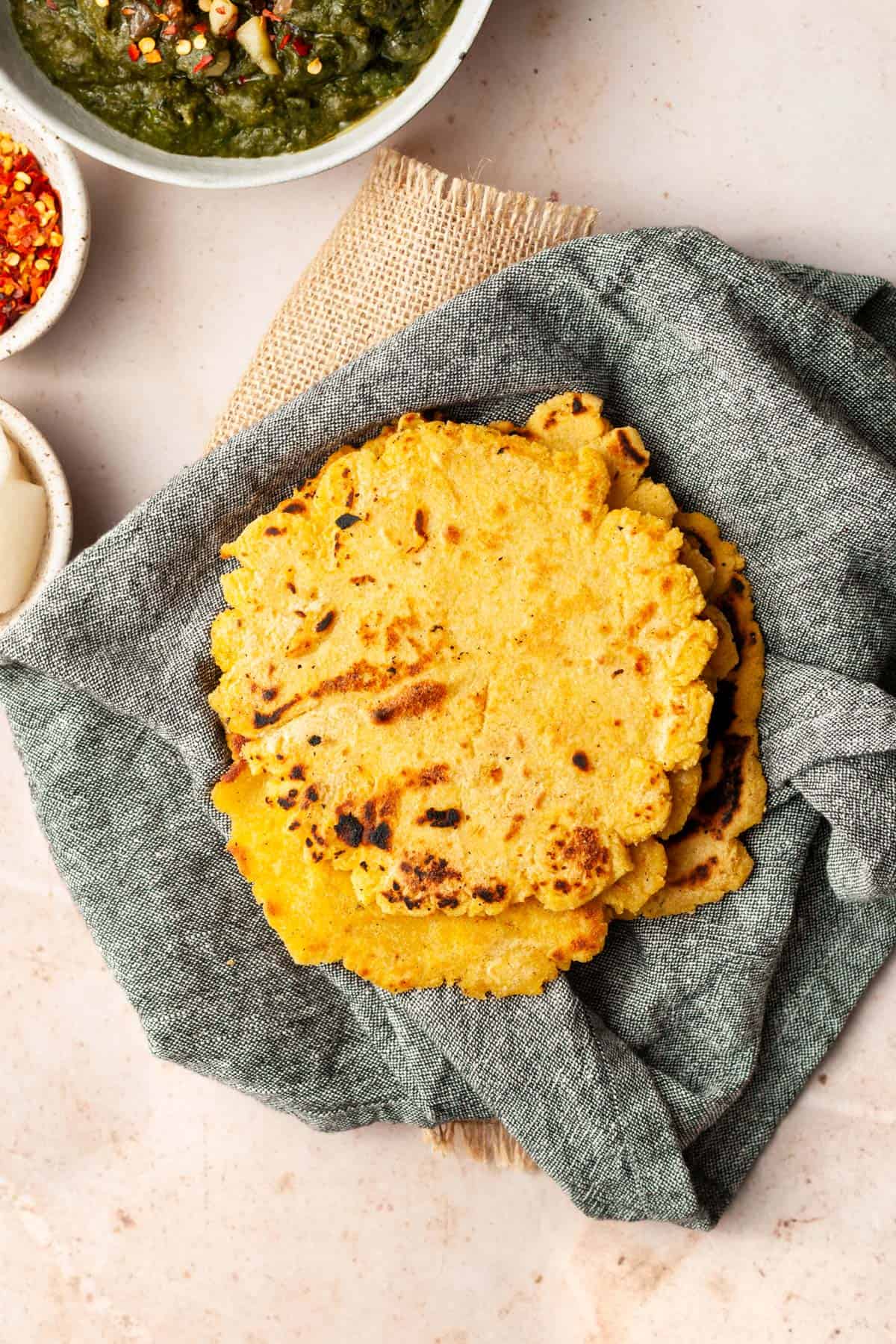 How to make sarson ka saag 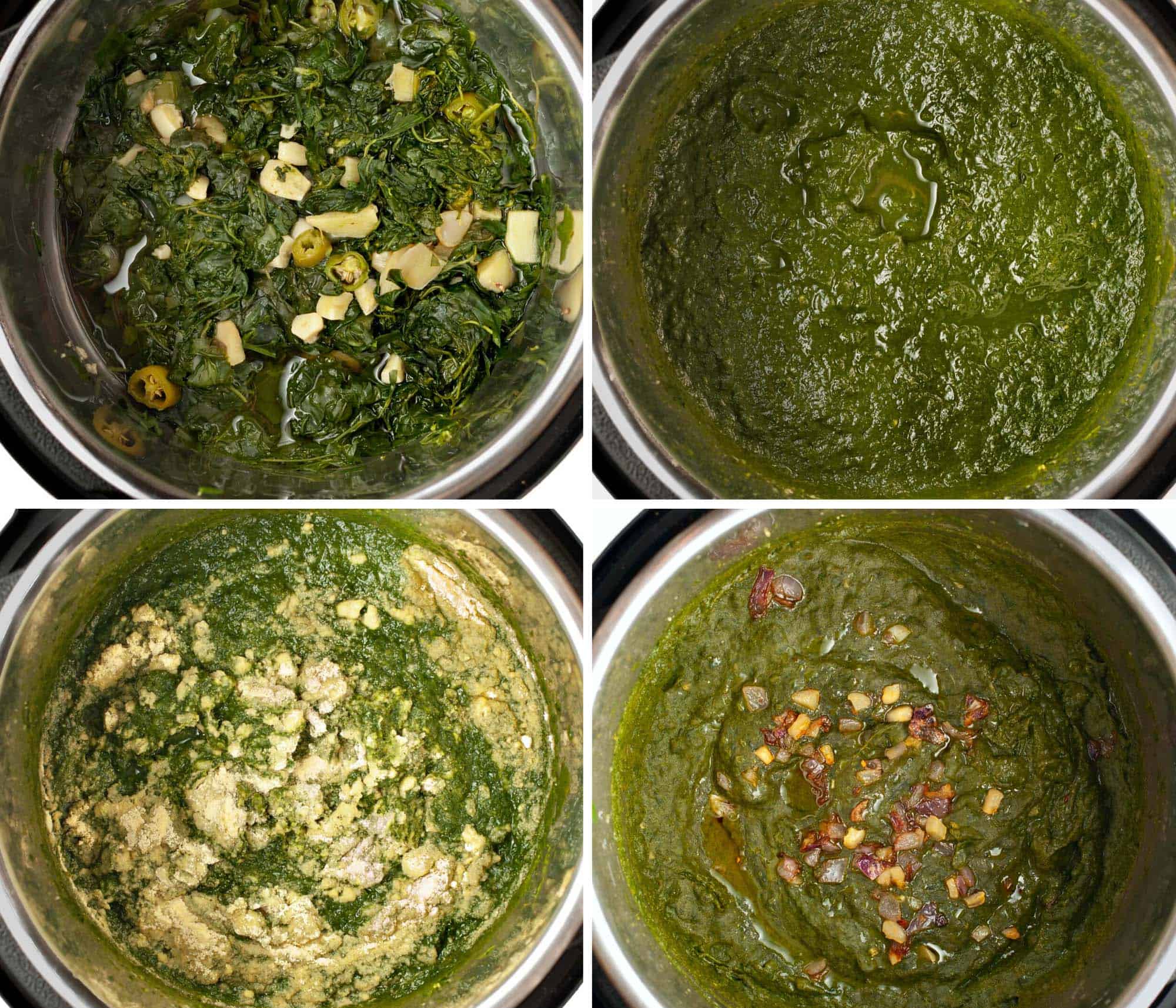 Can sarson ka saag be frozen?

Yes, absolutely. Cook and puree the saag, but skip the tempering. Let it cool down to room temperature and freeze it in freezer safe containers or ziplock bags.

Why is my saag bitter?

The saag could be bitter due to a couple of reasons. One, you added more fenugreek leaves (methi) than necessary. Fenugreek leaves are naturally bitter and too much can make the saag slightly bitter. And two, you didn’t remove the hard stems and stalks from the leaves. These can also alter the taste sometimes.

What is the difference between saag and palak ki sabzi?

Palak sabzi (especially when pureed) looks a lot like saag, but palak or spinach sabzi is made of, well, only spinach leaves whereas saag refers to a mix of greens. Also, palak sabzi usually has potatoes (aloo palak) or paneer (palak paneer) in it. Saag does not typically have either of these. 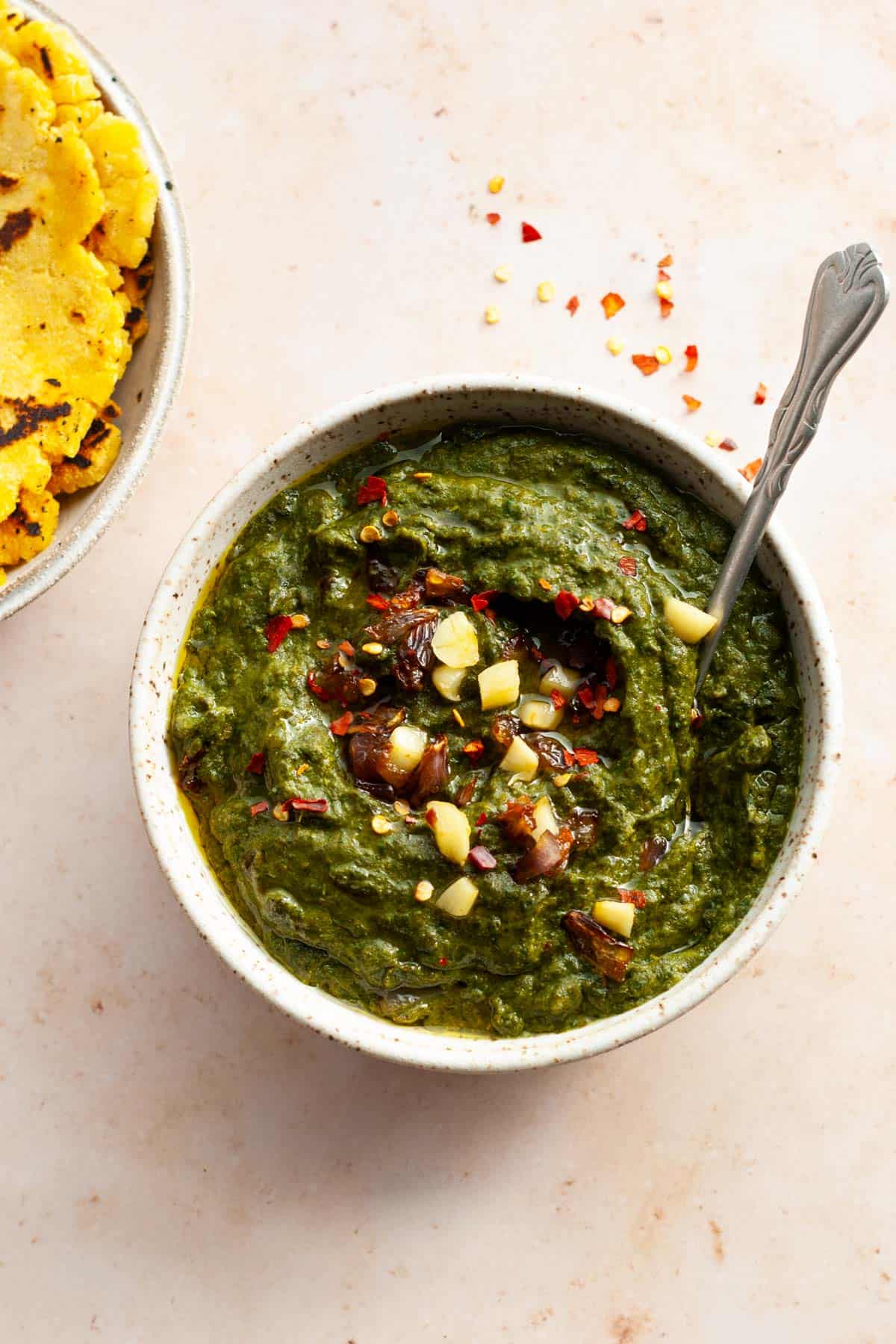 If you dig hearty and rustic fare, you will absolutely love these Punjabi recipes. They are comfort food at its best! 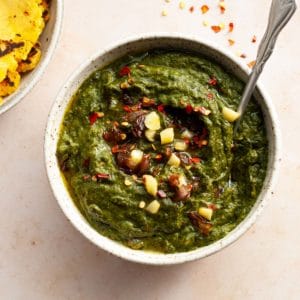 Sarson ka saag or sarson da saag is a wonderful mix of mustard greens and three other leafy greens with a tadka (tempering) of onions and garlic in ghee. Serve with makki ki roti (maize flour flatbread) for an authentic and absolutely delightful vegetarian Punjabi meal.

Let us know how it was!